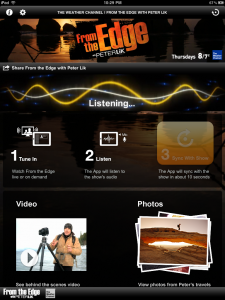 The Weather Channel was the latest network to try the Nielsen Media-Sync platform for iPad with last week’s premiere of From the Edge with Peter Lik.

After spending a few weeks trying ABC’s Grey’s Anatomy app from Media-Sync (see reviews of the first, second and third enabled episodes), it was interesting to see another network’s implementation.  TWC made much less use of social media and advertising in this initial outing, but more use of embedded browser windows in the synchronized content feed to showcase photos.

Media-Sync takes advantage of inaudible cues embedded in the regular program audio for Nielsen ratings.  The iPad’s microphone can then detect where a viewer is in the program and serve synchronized content in the app.

The trick is once you know a viewer is watching a show and where they are in the program (regardless of DVR use or time zone), how do you want to interact with that person?

Providing additional info during a reality-based show like this felt very natural.  The app provided a lot of the same kind of info I would normally look up on sites such as Wikipedia while watching, anyway. 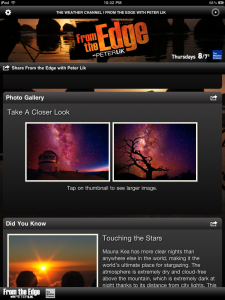 The From the Edge app tried a few different things than Grey’s Anatomy.  A module in the sync feed for a photo gallery presented two pictures and invited me to tap for a larger view.  Tapping opened an embedded browser window. I then wanted to swipe to get to the next image in typical iOS fashion, but had to close the browser to go back to the sync feed and select the next picture.

I see benefits in using the embedded browser because you can pull in content from the Web, such as the show’s photo contest on Facebook, without closing the app.  However, I also wonder whether some users will just leave the embedded browser open and not realize they need to close it to return to the synchronized feed.

Not all pictures in the sync feed were “tappable” (is that a word that can be used outside of beer kegs?).  I found myself trying to tap on all the pictures in the synchronized modules once I realized some had larger views. Since this is a show about a photographer, I want to be able to see big, gorgeous versions of all the pictures.  Some modules did feature large pictures, while others were more like large thumbnails without any link to a larger version.

The only social media components were some prepared Twitter and Facebook messages you could post after logging in to either service in the app.  The app’s premiere did not use social media modules such as check-ins seen with Grey’s Anatomy Media-Sync.  There was a “Connect with the show” link to open embedded browser windows with the show’s Twitter feed and Facebook wall.

Most of the sync feed modules have a button to share them via Facebook or Twitter.  However, they were pre-populated with messages that often did not match the content of the sync feed module as you might expect.  Also, the Facebook and Twitter messages on the same module were different.  For example, a module with a picture of an astronomer had a Twitter message of “See behind the scenes photos” and the Facebook message saying, “Cityscapes – While best known for his nature panoramic, Peter Lik has also wowed collectors with his stunning photography of city life.” The Twitter messages on those modules could also use a hash tag for better tracking.  They don’t have the #FromtheEdge tag like message pre-populated for the overall app Twitter message.

There was no in-app sponsorship or advertising even though the Web site and TV commercials heavily featured Bing as a sponsor.

The app was promoted in the TV show with a :15 spot at about 13 minutes into the half-hour show.  WeatherChannel.com also promoted the app with large graphics in rotation on the show page and in a module near the bottom of the show page. 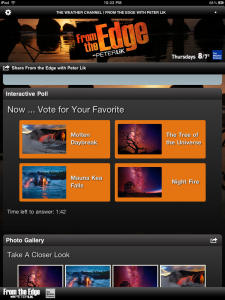 The modules appeared at a leisurely pace during the show, but at the end, four modules popped up in the sync feed within 30 seconds.  That was faster than I could read or navigate while also trying to see the final photographs featured on TV at the end of the show.  The ticking timer on the final poll to pick a favorite picture added to the pressure of trying to scroll, read, absorb and watch TV all at once.

The app also includes content outside the synchronized feed to be viewed when you’re not watching the show. As with the Grey’s Anatomy app, these videos and photos are viewed in an embedded browser window.  I also wanted to be able to swipe these images to navigate in normal iPad fashion rather than have to return to the gallery page to select the next one. Images for the premiere episode and next week’s are available in the gallery.

The video gallery includes six videos on “Get to Know Peter Lik” and four short videos from the premiere episode.

Behind the scenes, the transactions I monitored between the app and the Internet looked similar to the Grey’s Anatomy app. You can even see a remnant of ABC’s “My Generation” first version of the Media-Syn app in the naming of a “mygen-library.js” script still in use.  It’s funny to think that little javascript file has already outlived its parent show by several times.

The synchronized feed is served from twc.grav.us (owned by Gravity Mobile http://www.gravitymobile.com/) and media files come from Rackspace CDN servers.  Interactive poll results are handled a little differently from the regular modules because they have to be dynamically rendered. Normally, the synchronized modules are all downloaded from the Internet at one time when the app first synchronizes with the Nielsen audio watermarks.  The poll results are dynamically served from amazonaws.com in this case.

Because the regular modules for the whole show are loaded at the beginning, I would not place any sensitive info in them.  You wouldn’t want someone to get the file code at the start of a reality competition show, read ahead to see was kicked off at the end, and tweet it to the world 5 minutes into the show.

The app has 27 ratings in iTunes with 19 giving it five stars and 3 giving it one star.  The two reviews in the store are split. One person loved it and the other claims to have had a very weird problem involving an image permanent pasted to the center of his browser.