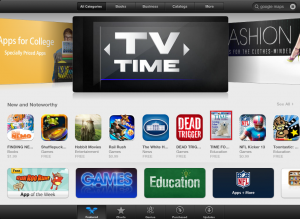 Apple has rolled out iOS 6 to the masses.  After completing successful and trouble-free over-the-air upgrades on my iPhone 4 and iPad 2, I noticed the redesigned App Store for the iPad featured the recently-updated “TV Time” collection front and center.  Let’s see which and what types of apps made the latest version of Apple’s curated list.

Apple categorizes the apps into five groups: Networks & Services; Shows; Share; Guides; and Tools & Providers.  Pay attention to how Apple chooses to group apps because those labels train customers to expect certain features in each.  However, when you look at the apps you’ll see the lines are very blurry.  Many social check-in, programming guide and video viewing apps started at different points but are navigating toward overlapping features. 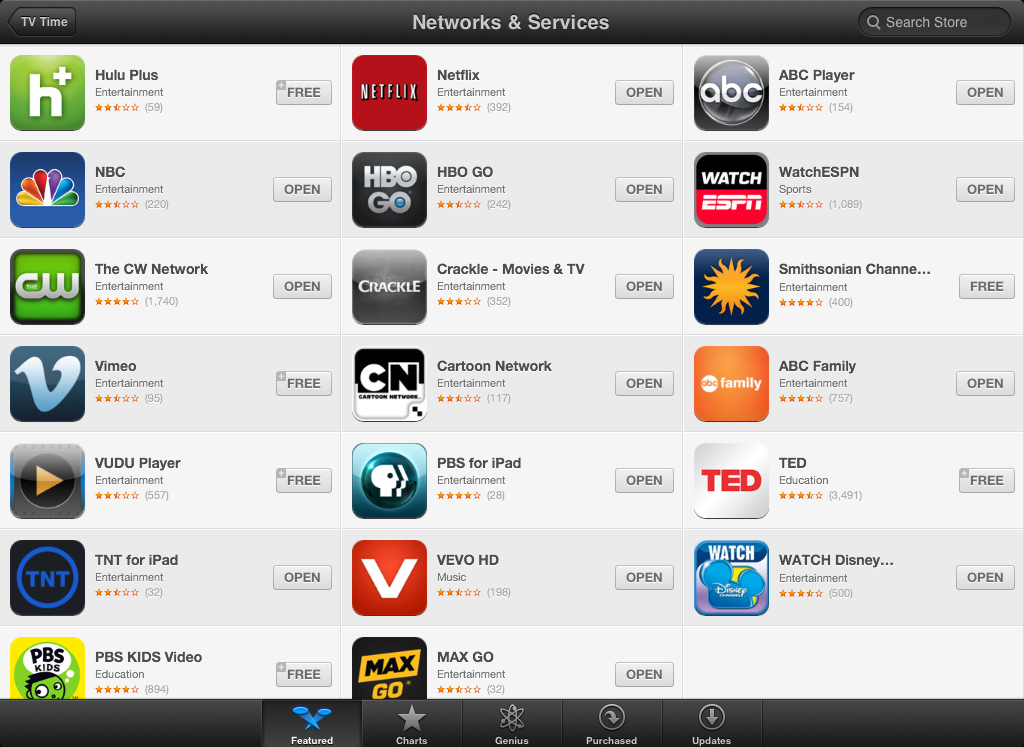 What’s the difference between a network and a service?  Trick question – they’re grouped so users don’t have to figure out. This means Hulu, positioned in the market between TV network apps and aggregators like Netflix and Crackle, sits comfortably in the category.  Apple includes 20 apps here.  Here’s how I classify them:

Eight of these apps come from just two companies, Disney and Time Warner, with each providing four. The remaining five apps are from NBC, CW, two PBS networks and the Smithsonian Channel.  Notice the Showtime network didn’t make the list, but it’s joint venture with the Smithsonian Institute did.

As mentioned, Hulu Plus is a mix of a network app and service app since it provides current network shows plus a library of archive shows and movies.  Hulu Plus and Netflix charge subscription fees while Vudu charges for rentals or purchases (but outside the app so Apple doesn’t get a cut).  Hulu Plus also runs ads, as do the free Crackle from Sony and Vevo for music videos.  TED’s “ideas worth spreading” app is ad-free.  Vimeo is for user-generated videos.  Note Amazon’s Instant Video app is not listed even though it’s a cross between what Netflix and Vudu offer.

All but four of the Networks & Services apps are rated at or below 3.5 out of 5 stars in the app store.  Only CW, the Smithsonian Channel and the two PBS apps are rated a 4 out of 5. 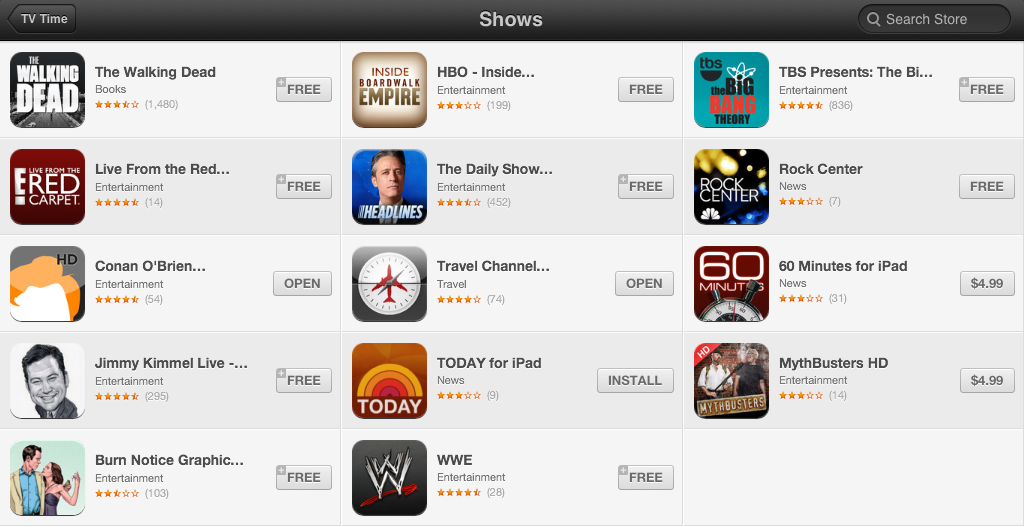 Fourteen apps made the Shows collection.

Only Conan O’Brien’s app specifically offers full episodes, although the 60 Minutes app offers video clips of all the stories from each broadcast.  Most of the other apps offer video highlight clips.  All are free except Travel Channel Layover Guide ($1.99), 60 Minutes ($4.99) and Mythbusters ($4.99).  Those last two shows share the same price but couldn’t be more different. I’d like to see a crossover stunt during November sweeps.

This group certainly feels like a hodgepodge.  TV Guide and Fanhattan have social features and links to content that could place them in  other categories.  Meanwhile, many of the apps in the “Tools & Providers” section below also have programming guides.

These last 10 apps are buried at the bottom of the TV Time list, but represent some of the largest content sources since most come directly from cable, satellite and telco providers.

Apple’s TV Time space will get crowded as more companies follow eyeballs to tablets for video viewing, search, second screen features and discovery of TV and Internet programming.  Categorizing these TV apps and making a clear proposition to consumers will only get harder as everyone gets chocolate in each other’s peanut butter, leading to an inevitable shakeout of near-duplicate offerings.  Networks should fare well thanks to TV Everywhere apps defined by unique programming. Refer back to this list in a few weeks or months to tell what Apple changes in TV Time.  Apple’s promotion can affect who wins and loses, especially for apps that don’t come from networks and major aggregators.